I completed my fourteenth annual BTO Breeding Bird Survey last Saturday.  My survey square is just to the west of Moreton Pinkney in south Northamptonshire.  The land is mostly agricultural - predominantly sheep grazed pasture with a single arable field.  A disused railway line runs across the northern part of the square, as does a small tributary of the river Cherwell.
The highlight of this particular visit was a fine male Redstart that perched up on the top of a hedge and made a couple of short flights before moving on across the field and disappearing. Presumably this bird is already on migration back southwards. This is very much a first for my BBS survey visits - Redstart is a scarce passage migrant through our area (though they formerly bred) and July and August are the best months to catch up with them locally.
There are quite a few species I have only seen once during these surveys, others include Wheatear, Hobby, Fieldfare, Marsh Tit, Sand Martin, Tufted Duck, Little Egret and, perhaps most surprisingly, Sparrowhawk. In total I've recorded 72 species with an average of 41.5 species per year (across the two counts).
Many species have been remarkably consistent over the years, appearing each year in roughly similar numbers, but a few have shown declines and increases.
The two that stand out as doing quite well in recent years are Wren and Blackcap:

On the minus side, Chaffinch are not doing so well and Tree Sparrows have gone.  There are still a few Tree Sparrows not too far away so it is possible they may re-colonise.
The decline in Chaffinches and Tree Sparrows is very much in line with trends across the BOS area reported last year in Bird Trends in the Heart of England 1977-2016.  Between 1993 and 2015, Chaffinch declined by 30% and Tree Sparrow by 67%.
For the same period, the trend across the whole of England shown by The Breeding Bird Survey 2018 was down for Chaffinch (-18%) but up for Tree Sparrow (63%).  The latter seems to be doing well further north.  In our area Chaffinches are a common bird of farmland habitats, as well as woodlands and gardens, and this may explain why it is declining more here than elsewhere.  In most parts of the country the Chaffinch is a woodland bird and is regarded as a woodland generalist species, a group which are generally faring quite well.

Posted by Mike Pollard at 17:59 No comments:

We've had an exciting couple of weeks birding in the Banbury area, especially at Grimsbury Reservoir with the first ever Red-rumped Swallow recorded in the BOS area.  I think this is the 'first first' since Cattle Egret and Little Bunting were added to the BOS list in January 2017.  A great reward for John Friendship-Taylor's dedication and skill in covering the Grimsbury Reservoir patch in recent years, and enjoyed by many birders and other reservoir-goers during the week or so it stayed around.  Much has already been written about this bird - please refer to John's account for the finders story - so I'm not going to add more, other than a little compilation video I've put together using my own phone clips taken through the telescope and few stills I managed to capture.

A recent personal highlight has been seeing a couple of male Yellow Wagtails return to the farmland on the edge of Wardington - between the village and the A361 - an area where they breed fairly regularly but last year were absent.  They sometimes perch on the roadside fence line and have become quite used to traffic so with a bit of patience and luck it is possible to get some nice views.  The look to be nesting in the adjoining expanse of winter wheat this year.  The area has also been good for Skylarks, Linnets, passage Wheatears and Brown Hares. 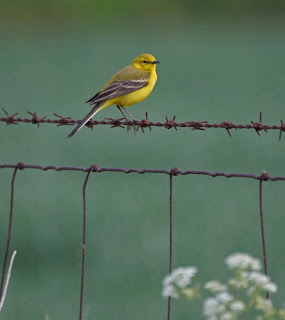 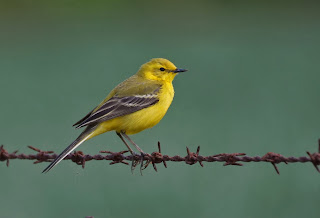 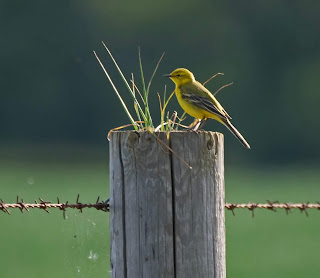 I also managed some nice shots of a male Kestrel perched on a characterful telegraph pole on the other side of Wardington. 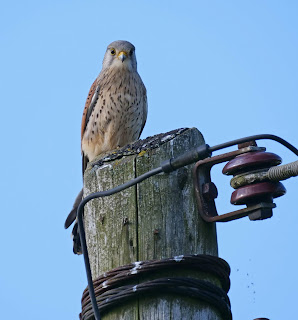 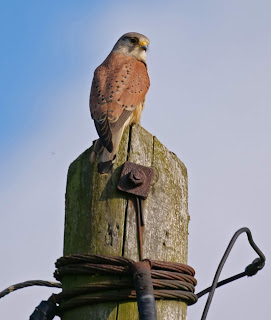 You can also now find me on Twitter:  Mike Pollard@mikepnature

Posted by Mike Pollard at 19:33 No comments:

A great few days for tern fans in the Banbury area, with Common and Arctic at both Boddington and Grimsbury Reservoir yesterday, and our two rarer terns - Little and Sandwich - last Thursday and today respectively.  Looking back at the records, the Little just shades the Sandwich in local rarity terms, but both are exciting and beautiful birds to have on our local patch and well done to the finders.
The Little Tern spent most of the time fluttering around in the middle of Boddington Reservoir, but after a heavy shower passed through it decided to take some time out and perched on the pontoon, for a preen and rest.  With a quick jog around the reservoir I managed to capture some phonescope clips before it took off again.


The Sandwich Tern was much more obliging, not only appearing on a weekend day, but also flying around the perimeter of the reservoir for some nice fly-pasts, and regularly stopping for a break on one of the buoys.  It was also able to catch a few fish, hopefully fuelling it on it's way to a breeding colony somewhere on the coast. 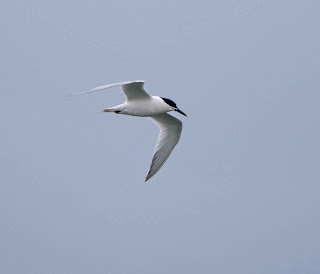 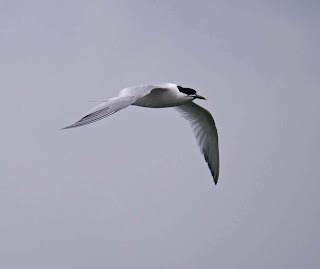 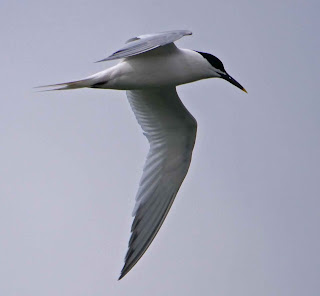 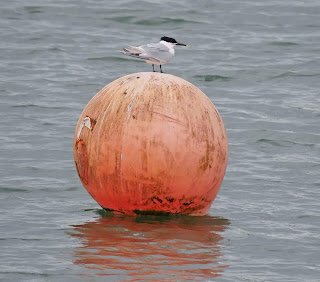 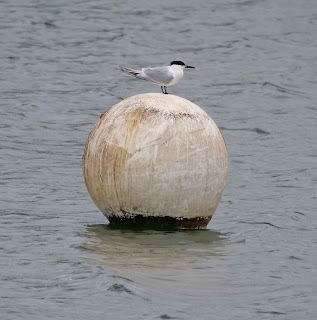 Lots else going on of course with spring in full swing, here are a few more recent images from the local area.  Possibly most notable has been the abundance of Orange Tip butterflies, including both make and females in our back garden, attracted to Honesty flowers.

Very quick post with images from early this morning at Boddington Reservoir where there were three adult Little Gulls, later joined by an Arctic Tern, and lunchtime at Grimsbury Reservoir where three more adult Little Gulls lingered from early morning, giving some great views.  A real treat to have them passing through our area and a rare opportunity for a prolonged view of them! 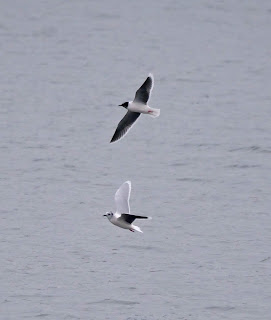 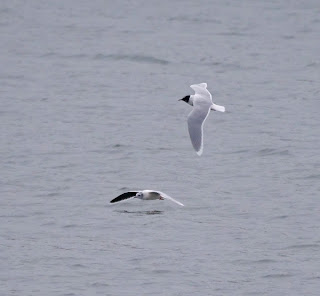 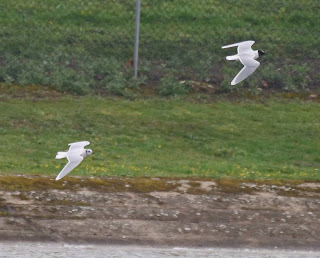 Posted by Mike Pollard at 22:54 No comments: